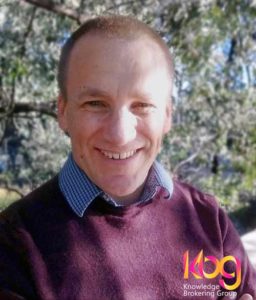 My main knowledge brokering focus has been at the science-policy interface.  My first significant move into knowledge brokering came in 2008 when I joined the Australian Government as a senior policy adviser to Australia’s Commissioner to the International Whaling Commission.  My role involved developing whole of government policy advice, based on the best available evidence, to advise the Australian Government on a range of issues, particularly those of a scientific or technical nature.

To fulfill this role I had to broker between the policy team and Australian scientists (science-policy).  This involved collaboration and leadership of various scientific based programs which fed into policy, such as the introduction of whale Conservation Management Plans to the IWC, joint project management of an eight year, $38 Million Australian Government program of whale research and conservation, and representation of Australia’s policy interests at meetings of the IWC Scientific and Conservation committees.  The role also required knowledge brokering with NGOs and community organization.

In addition the role also required brokering with lawyers from the Attorney General’s Department (policy-law), including during Australia’s legal case against Japanese whaling in the International Court of Justice.  I was also required to broker on behalf of the policy team with diplomatic officers from the Department of Foreign Affairs and Trade, and on behalf of the Australian Government with representatives from other governments (policy–policy and country-country). This included travelling internationally to share knowledge with other countries on the development of IWC Conservation Management Plans.

My other main role within the Department was as Australia’s National Focal Point to the Convention on Biological Diversity’s (CBD) Subsidiary Body on Scientific, Technical and Technological Advice (SBSTTA), the main CBD body for discussing all scientific and technical aspects of the Convention. The role of this position is to translate scientific advice into policy advice to support the Australian Government position on relevant environmental policy issues. I was responsible for brokering information between Australian scientists and the Government. This required identifying appropriate experts; coordinating their input to specific issues; and acting as the broker between them, the Government and the Convention body.

Prior to joining the Australian Government I worked as an academic in Australia, Finland and the United Kingdom. I completed my PhD and worked in research in the fields of evolutionary biology, genetics and conservation biology.  In Australia one of the main projects I worked on was to assist in founding the Southern Cross Centre for Whale Research, at Southern Cross University. This role required my knowledge brokering skills to build collaboration with other research groups in this field (science-science) in Australia and New Zealand; train its first young researchers in lab and field techniques (science-science); build public support for our field research (science-public) and gain approval and funding for our research (science-policy). The Centre is now one of Australia’s leading whale research centres.

One of my aims in co-founding the Knowledge Brokering Group is to promote greater flow of knowledge from knowledge producers, such as scientists, to knowledge users, such as policy makers.